Since before anyone kept records people have celebrated Winter Solstice, the shortest day-longest night of the year, and that happens to be today.

And every year around now I share a quick note to celebrate the solstice ( See https://carlkruse.org/happy-winter-solstice/  for a similar solstician greeting.)

In prehistoric times people worried of the sun’s absence and performed elaborate rituals to encourage it back. In Roman times the celebration of Saturnalia happened on December 25th, the date of the solstice in the Julian calendar, later adopted by the early Christian church as the alleged (but improbable) date for the birth of Jesus, leading to the celebration of Christmas. And because other celebrations such as Hannukah and Kwanzaa arguably arose from the large-scale popularity of Christmas, we can thank the ongoing influence of the Winter Solstice for the host of celebrations taking place as the year comes to an end. 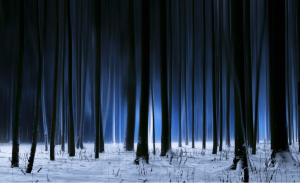 “Alone In The Woods” photograph by Roman Alyabev

Any reason to celebrate is good so let’s continue humanity’s long tradition of merry-making and celebrate.

Over here my celebration is an introspective one, grateful for enduring friendships, family, love and even in these somewhat dark times, the hope for a better future.

P.S.  Many people seem to have their own modern-day Winter Solstice rituals, with slowing down, turning down the noise, “being like somnolent bears,” as some of the more popular ones.  See this Winter Solstice post.