Before anyone kept records we have been celebrating Winter Solstice, the shortest day ( longest night) of the year. In prehistoric times people were afraid the sun would not return and performed elaborate rituals to encourage it back. In Roman times Saturnalia took place around December 25th, the date of the solstice in the Julian calendar, later adopted by the early Christian church as the alleged (but probably unlikely) date of the birth of Christ, leading to the celebration of Christmas.  And because other celebrations such as Hannukah and Kwanza arguably arose from the large-scale popularity of Christmas, we can thank the ongoing influence of the midwinter equinox for the host of celebrations taking place as the year comes to an end.

The word solstice comes from the Latin words for sun, “sol,” combined with the word “stitium,” which is to stop.  In our modern calendar Winter Solstice takes place this year December 22, which is today.  Any reason to celebrate is good so let’s continue humanity’s long tradition of merry-making and celebrate. Here we will do so with a chewy-velvety glass of Cabernet Sauvignon and some time thinking on things we are grateful for, like our friendships, our family, and that even though much seems awry in the world, we remain hopeful for a better future.  Happy Solstice all from Carl Kruse Dot Org.

P.S.  Always good to see other people post about their take on the Winter Solstice and how they celebrate it in their own ways.  See here.

The blog’s homepage is at https://carlkruse.org
Contact:  carl AT carlkruse DOT com
The blog’s last post was on the greatest aquarium in the world. 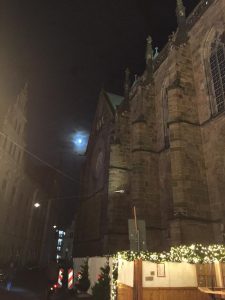 Moon over the Bremen cathedral