Carl Kruse is on break.  This is a guest post from Brent Harrison.

Some time ago I got together with a friend on Martin Luther King Day and to honor the man we read together his “Letter From A Birmingham Jail” in which King answered his critics who called his activities “untimely and unwise” with one of the best justifications for civil disobedience found anywhere.  As King urged local authorities in the South to obey federal anti-discrimination laws but at the same time encouraged violation of local ordinances that were discriminatory, e.g., he advocated following the law on one hand but breaking it on the other, he found the need to reconcile both actions and does so in his letter.

King also wrote here about the need to act sooner rather than later,  what makes for just versus unfair laws, and ruminates on the interconnectedness of all of us in a beautiful discussion of ethics found in few other modern American letters.

In what has now become something of a tradition,  on every Martin Luther King Day I re-read his “Letter From A Birmingham Jail” and encourage everyone who can to do so.

The link below is provided courtesy of the University of Pennsylvannia.

https://carlkruse.org
CONTACT:  Carl AT carlkruse DOT com
The blog’s last post was on the Fairchild Tropical Garden in Miami. 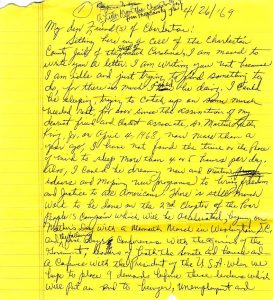 Original rough draft of “Letter From A Birmingham Jail” by MLK