SETI Project  Can Use Our Help

One of my favorite nonprofit groups is the SETI Institute, which is the world’s top organization that is looking for life elsewhere in the universe. I love SETI because it’s the chance to get involved in answering one of humanity’s last remaining big questions – Is there anyone else out there? And while we have yet to find anyone, it’s an exciting time as new discoveries, such as those of the Kepler mission, paint a universe larger than we once imagined. The odds look good that what happened on Earth, which is to say life, also happened elsewhere.

Assuming there is intelligent life out there, it is could be that it has developed radio or similar technologies whose use would send electromagnetic signals in all directions through space at the speed of light, and over time travel vast distances.  One SETI project is to tune in and see if we can “hear” any of this. The movie Contact was inspired by such work, and the protagonist played by Jodi Foster is a character based on Dr. Jill Tartar, formerly head of research at the SETI Institute.

In 1999, a SETI team at the University of California, Berkeley, launched a project called SETI@HOME. The idea was that anyone with a computer could download a screensaver so that whenever their computer was idle the software would get data from the Arecibo Radio Telescope in Puerto Rico and analyze it for extraterrestrial signals. Combining small computers to perform a large task is known as “distributed computing” and SETI@HOME today is the largest distributed computing project in human history.  Lassoing thousands of personal computers together brings computational power  surpassing that of even advanced supercomputers, and today this approach has extended from SETI to other projects, such as weather predicting and cancer research. 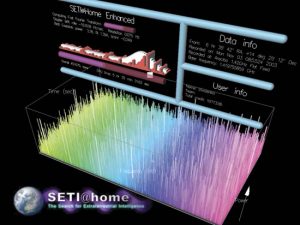 I write about all of this because I recently received a letter from the Berkeley team of SETI@HOME seeking help. And before sharing the letter I had wanted to explain my involvement with SETI.

Now the letter from SETI@HOME:

“In recent years it’s become clear that planets are common about stars in our galaxy and the number of possible abodes of life number in the billions. The number of civilizations that inhabit our galaxy is still unknown, but thanks to SETI@home anyone can help search for them using their home computer or mobile phone. But SETI@home still needs your help.

It’s been an exciting year for SETI@home. In addition to our ongoing search for extraterrestrial radio signals at the Arecibo radio telescope in Puerto Rico, we’ve started analyzing data collected by the “Breakthrough Listen project” at the Green Bank Observatory, the largest fully steerable radio telescope in the world. “Breakthrough Listen” will soon start collecting data at the Parkes Radio Telescope, the largest steerable radio telescope in the Southern Hemisphere, and SETI@home could analyze these data. To do so, SETI@home needs two things. First, we need you and your friends. The current flood of data requires more processing power than SETI@home volunteers currently provide. Please spread the word about SETI@home.

Second, SETI@home needs the funding to obtain hardware and develop software required to handle this new data source. SETI@home has only obtained one third of the $450,000 in funding needed for this coming year. If SETI@home doesn’t meet these funding goals, expansion to new telescopes may not be possible. I’m hoping that you will give generously.

Together we can reach the stars. Happy Holidays!

P.S. Donors contributing $250 or more will receive invitations to the Berkeley SETI Research Center Holiday Party to be held December 16 in Berkeley, CA. The event will feature behind the scenes tours of our labs, talks on the latest developments in the search for advanced life from BSRC Researchers and special guests. There will also be giveaways of one-of-a-kind souvenirs of Berkeley SETI history. Those unable to attend in person will be given access to an exclusive online question and answer session with BSRC Researchers.

The University of California is a nonprofit educational and research organization governed by Section 501(c)(3) of the IRS Code. Donations are tax deductible to the full extent of the law for residents of the United States and Canada. (Your tax situation may vary – please consult your tax advisor – Carl Kruse ).

I have had SETI@HOME on my computers since its inception, and I hope anyone reading this can lend a hand to a project that does so much with so little. The Search for Extraterrestrial Intelligence is one of the great remaining questions facing humanity and speaking from experience, I think anyone getting involved — even if just downloading the free SETI@HOME software — will feel enriched, joining part of a grand quest.

Many thanks!
Carl Kruse