A MLK Tradition: Reading A Letter From A Birmingham Jail
by Carl Kruse

It was on a Martin Luther King Day in 2006 that I first thought of reading some of King’s original work to honor the man behind the U.S.A. holiday and remembered an essay that was in a Norton anthology back in college called, “Letter From A Birmingham Jail.” I decided to start there.

MLK wrote this essay while imprisoned in Birmingham, Alabama as a response to critics who called his work of non-violent resistance against racism “untimely and unwise.” 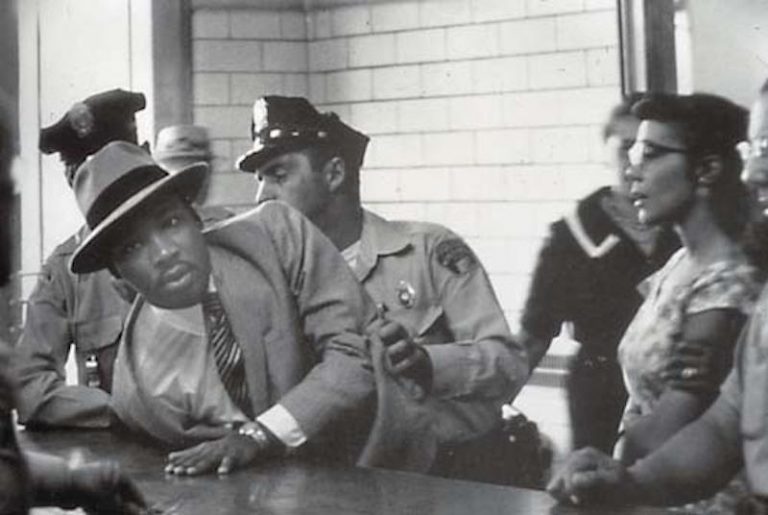 MLK and Coretta King being arrested.

It is a 10-minute read and one of the better justifications around for civil disobedience.

King also wrote in this letter about the need to act sooner rather than later, what makes for right versus unjust laws, and meditates on the connection between humanity in a rousing discussion of ethics found in few other modern USA essays.

At the time MLK had urged the local governments in the U.S south to follow U.S. federal anti-discrimination rules but at the same time encouraged disobedience of local laws that were racist. Meaning, he advocated following some rules but breaking others, and found a need to reconcile this contradiction. He does so in this essay.

Some of King’s words have not aged well, perhaps a good sign of the lengths the U.S. has come in race relations in the years since he wrote, and yes, this is so regardless of recent indications to the contrary in U.S. politics.

A link to King’s letter can be found here: https://web.cn.edu/kwheeler/documents/Letter_Birmingham_Jail.pdf

Another discussion of King’s essay is here:  http://historynewsnetwork.org/article/151628