The March for Science

Some scientist friends have come out against the upcoming March For Science, saying that while good intentioned, the march runs the risk of trivializing and politicizing science, turning scientists into another group embroiled in the culture wars and further alienating science from a certain segment of the world’s electorate. 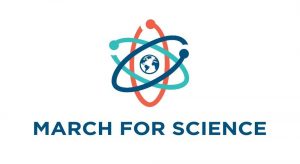 Who knows what the march does. But that science is increasingly under attack these days, particularly under the current U.S. administration, should be viewed as something of a moral crisis, a national emergency.

Poor science. Pulled us out of the dark ages and made our lives better for centuries. From astronomy to medicine, meteorology to physics, biology to electronics. Imagine the most educated person alive 300 years ago. They would be a total ignoramus today given how we know our world works. This is because of science.

The good thing about science is that it’s true no matter what anyone believes. It works. In spite of marches, politics or alt-news, gravity still exerts its force on anyone stepping off the Empire State Building. Even ideas that should not be controversial, such as evolution and human-caused climate change, are true, no matter what anyone says otherwise. We think the sun rises every day from the east and settles in the west but we know the sun doesn’t really do that.

Science sometimes seems highfalutin but it’s nothing more than comunal common-sense.  “Do you see what I see when looking at this flower/star/rock/lung/plant?” That is what science asks.   “Do you see what I see?” And with thousands of well-intentioned people looking at the world and asking other thousands of well-intentioned people if they see the same thing and if not why not, science comes to a better understanding of what is happening.

But is anything safe from politics? Galileo was imprisoned for advocating a correct view of the cosmos, schools continue battling creationists, and climate-change deniers insist there is no such thing.

We can use scientific knowledge to improve our lives. But we have to listen to what it says and be willing to follow the truth where goes. You would think science safe from politics, but it is not, so no worries about a march politicizing something that has so often been political.

Because we have found no better tactic of learning how the world works, nor a way of so dramatically improving our lives, that we need to advocate strongly for science seems silly. But here we are, needing to push for science. If the March For Science can accomplish even a bit of this, it is good. And we should all join, marching in our own way.