A Fantastic Time For Discovery, and for SETI

The journal NATURE’s website reportedly crashed after it announced the NASA  discovery of seven Earth-like planets orbiting a star near us, some 40 light years away in the Aquarius constellation.

The star known as TRAPPIST-1 was observed by a Belgian research team with data collected from NASA’s space-based Spitzer telescope . 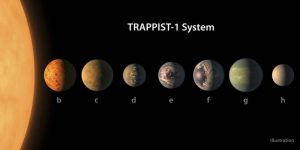 This graphic provided by NASA/JPL-Caltech shows an artist’s illustration of what the TRAPPIST-1 planet system might look like.  The planets circle about the dwarf star  Trappist-1, about the size of Jupiter. Three are in the so-called Goldilocks zone, where liquid water and, possibly life, could exist. The others are right on the doorstep.

Three of the seven planets are in the “Goldilocks” range, or possibly habitable, as they are the right distance from the star so that liquid water could exist on the surface. That gives the star system the record for the largest number of goldilocks-zone planets found orbiting a single star.  TRAPPIST-1 is a dwarf star and will continue to burn for trillions of years, potentially more than enough time for life to develop, especially on those planets in the habitable zone.

Our Milky Way is 100,000 light years wide, the visible universe billions of light years in every direction, and so a distance of 40 light years makes TRAPPIST-1 our cosmic neighbor.

Twenty years ago we didn’t know there were planets outside the solar system. Now, every day,  seemingly everywhere, we find new planets, including some with Earth-like qualities. Is it just  a matter of time before we find a planet, or many planets, where what happened on Earth — the rise of life and intelligence, also happened there?

We live in times where too often fall short of our full potential. It is during these times that the joy of discovery never smelled sweeter.

P.S.  With the wave of exoplanet discoveries, especially of Earth analogues,  it’s a beautiful time for SETI.  Check out the former blog posts regarding the Search for Extraterrestrial Intelligence: