Re-reading A Letter From A Birmingham Jail
by Carl Kruse
In what has become now a tradition, ( see Carl Kruse Talks About Martin Luther King ), every Martin Luther King Day I re-read King’s now classic “Letter From A Birmingham Jail,” an essay written as a response to King’s critics who at the time called his activities of nonviolent resistance against racism “untimely and unwise.” 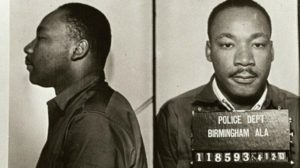 His essay is one of best justifications for civil disobedience found outside the writings of Gandhi.

King also wrote here about the need to act sooner rather than later, what makes for just versus unfair laws, and ruminates on the connection between all of us in a beautiful discussion of ethics found in few other modern American letters.

At the time King had urged the local authorities in the American south to obey U.S. federal anti-discrimination laws but at the same time encouraged violation of local ordinances that were discriminatory. That is to say, he advocated following some laws but breaking others, and found a need to reconcile this contradiction and he does so in this letter. 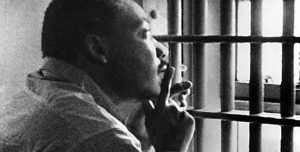 King’s words are dated, perhaps a good sign of how far the U.S. has come in race relations in the 50 years that he wrote, in spite of any recent indication to the contrary in recent U.S. politics.  If you’ve never read anything  by King, I recommend his letter, if nothing else to get a sense of the courage and moral fortitude of the man.

King’s original typed version of the letter is provided courtesy of the Stanford University archives. http://okra.stanford.edu/transcription/document_images/undecided/630416-019.pdf

P.S  I hear some celebrate a home-brewed and half-baked “Robert E. Lee” day in lieu of  MLK day, something I do not understand.